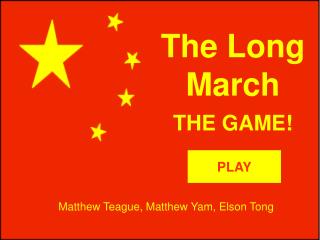 The Long March. THE GAME!. Matthew Teague, Matthew Yam, Elson Tong. PLAY. OCTOBER 1934. For the entire year Guomindang troops have been encircling the Jiangxi Soviet. The only option is to break free of the blockhouse rings and retreat to the Yanan Soviet in the North. NEXT. BREAKING FREE.

The growth of the CCP 1921-34 - . period of greatest growth? how important were the soviet union? when was mao at his

How important was the ‘Long March’ to Mao’s eventual success? - . l/o – to identify and evaluate the key features

Free Labor Ideology and the Politics of the Mexican War - . the long march to civil war begins. previous conflict over

China in Revolution - . struggles of the republic. chinese revolution of 1911. dr. sun yat-sen. “three principles of