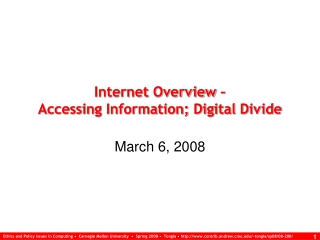 Internet Overview – Accessing Information; Digital Divide. March 6, 2008. Design and History of the Internet. Layperson misconceptions WWW = Internet = Email = online = broadband Some questions to think about Who owns the Internet? Who controls the Internet? Is the current system OK?