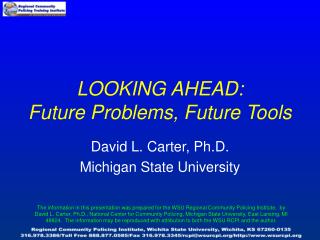 Future of Rare Kaon Decays at the CERN-SPS - . fermilab, october 7 , 2004 ceccucci for the na48-future working group.

Past, Present and Future - . week 7 it 22. this teacher led activity aims to help children differentiate between verbs in

present - Future. we use tenses of verbs to refer to actions or situations in the present, in the past and in the future

The Future and past and Present Of Media Education - . holly willis • school of cinematic arts • usc • ufva

Education and Action for a Sustainable Future - . debra rowe, ph.d president u.s. partnership for education for

Two Decades of HAART Past, Present, and Future - . overview. the past brief history of haart the present considerations

SFA4SCHOOLS: The School Portal Project - . the school portal and new and improved ifap tools for our partners today’s

Future Challenges For Australia - . australia in its regional and global contexts stage 5 geography syllabus 5a4.

FIRST PRINCIPLES OF VALUATION - . time value of money : six functions of a dollar. future value of a one time deposit