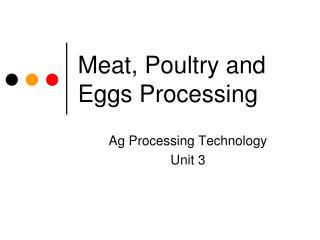 Meat and Poultry - . 1 egg = how many ounces of meat?. 1. what is the main nutrient found in meat?. protein. what is the

Poultry, Eggs, and fish - . poultry, eggs and fish all contain a large amount of e-coli if not stored and handled

Meat, Fish and Poultry - . notes to complete the study sheet. meat is cooked for four basic reasons:. to make it safe to

Meat, poultry seafood - . meat. the edible flesh of animals, birds and fish eaten by humans. important part of the human

Formal Inquiry into Recruitment and Employment in Meat and Poultry Processing - . sue coe. terms of reference. to gather

Peanuts: Healthier Than Meat and Eggs - Organic peanuts are an improvement as they deliver peanuts to us in their most

Chapter 6 Meat, Poultry, and Seafood - . grades of meat. meat inspection is mandatory in the united states. it ensures