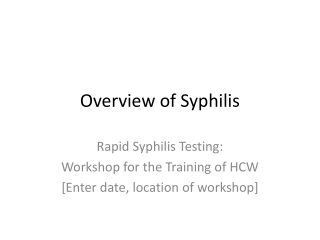 Overview of Syphilis. Rapid Syphilis Testing: Workshop for the Training of HCW [Enter date, location of workshop]. Learning Objectives. By the end of this module, participants should: Understand of the global epidemiology of syphilis and congenital syphilis

DegreeWorks Scribe Overview - . agenda – what are we doing?. brief overview of what we will be doing touch on four

Strategic Analysis of PepsiCo - Introduction. methodsareas of concerngrowth opportunities and

Accurated Syphilis Testing Services - Are you having mild flu-like symptoms - like a slight fever, tiredness, sore