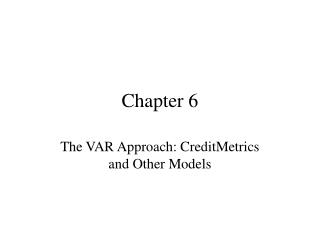 Chapter 6. The VAR Approach: CreditMetrics and Other Models. The Concept of VAR. Example of VAR applied to market risk. Market price of equity = $80 with estimated daily standard deviation = $10. If tomorrow is a “bad day” (1 in 100 worst) then what is the value at risk?