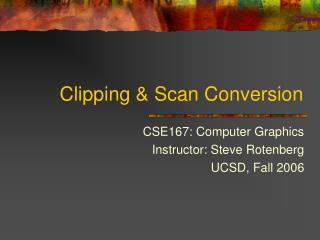 Copywriting for Conversion - If your prospective customer isn’t 100% comfortable, you can forget about conversion. this

Using the iOBD2 Scan Tool - . iobd2. the iobd2 interface is an inexpensive and easy to use diagnostic interface that

Computer Graphics 9: Clipping In 3D - . contents. in today’s lecture we are going to have a look at some perspective

CONVERSION OF MUSCLE TO MEAT - . ansc 3404 objectives : to learn the process of converting live muscle to meat. overview.