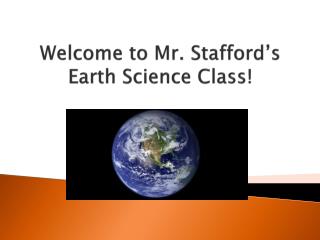 Welcome to Mr. Stafford’s Earth Science Class!. What to expect . This class will be geared to prepare you for your future science courses. You will see some basic chemistry, biology, math, etc. The material we cover will definitely include all things earth. Volcanoes Rocks Atmosphere