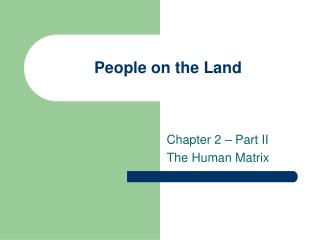 Africa: People of the Land - . the sahara. few people are able to live in the sahara. northern parts of the sahara dry

Land and People - . chapter i. w here is the u.k?. different names for britain and its parts. official name the united

What can people do on glaciated land? - . what do we use glaciated highlands

NRCS: On the Land, For the Land - . natural resources conservation service. agency of the u.s. department of

NRCS: On the Land, For the Land - . natural resources conservation service. agency of the u.s. department of

The Land and Its Early People - . ss8h1: the student will evaluate the development of native american cultures. key terms

The Land and People of the Midwest - . by mariah brown. the land. the midwest is covered with plains and grasslands and

Chapter 2 The Land and the People - . the philippines is located in the southeastern portion of asia. because of its

Chapter 1-3 “Population &amp; Settlement: People on the Land” - According to the un, world population is expected

Two People, One Land - The arab-israeli conflict has continued since the early part of the 20 th century. key