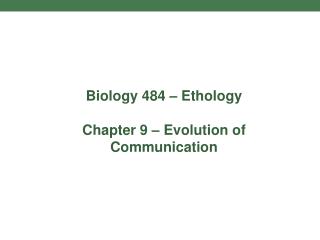 Biology 484 – Ethology Chapter 9 – Evolution of Communication. Chapter 9 Opener: When a bull elk bugles, other males listen. Communication can be between individuals, groups, or even different species. 9.1 The pseudopenis of the female spotted hyena can be erected. CLONING - . lecture notes for biology today. what is cloning?. to most people, the term “cloning” means making a copy

BIOLOGY KEYSTONE REVIEW - . use this powerpoint presentation to complete your viewing guide handout per topic. at the end

Biology Assessment Items - . biology content. how are prokaryotes different from eukaryotes? a. prokaryotes can make

Biology SOLs Part II - . 2006 released test. a. treatment of work areas with chemical disinfectants b. use of gloves when