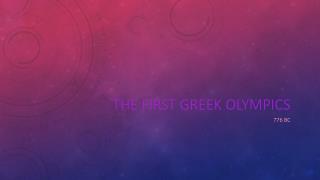 COMPARING MODERN and ANCIENT OLYMPIC - . when were they first held ?. ancient olympics. modern olympics. 776 bc. 1896 ad.

THE OLYMPIC GAMES - . the first olympics were held in greece in 776 b.c. the stadium in olympia. ancient olympia

The Story of the Olympic Games - . a journey to ancient greece. no one is sure how the olympic games really began, but

Ancient Olympic Games - . history. according to historical records, the first ancient olympic games can be traced back to

Ancient Greek Olympics  - . the first olympics games are usually given the start year of 776 bce, but they probably

The Ancient Olympic Games! - . originated in greece were held between the different city–states they were always held

Rio Olympics: Day 13 - Highlights from the thirteenth day of competition at the rio