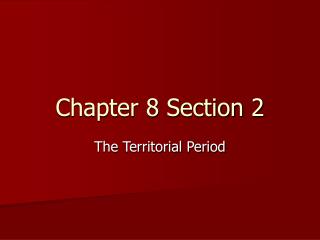 Chapter 8 Section 2. The Territorial Period. Territory of Louisiana. After Congress approved the Purchase, it planned the government for this vast new territory Created two territories in March 1804 The territory of Orleans-contained most of the present state of Louisiana

STARS Chapter 8 Section 1 - . what we will talk about today. what color tells us about the temperature of a star how we

Chapter 8 Section 2 Jewish Beliefs and Texts - . what is monotheism (look in your book). what do you think he/she (god)

Chapter 8, Section 3 Rise of Political Parties - . americans distrusted political parties they could be used for personal

Chapter 8, Section 4 - . john adams as president. the xyz affair. the french objected to jay’s treaty between the u.s.

Chapter 8 Section 5 - . plant responses and growth. tropism. a plants growth response toward or away from a stimulus

Chapter 8 Section 2 The Kingdom of Aksum and East African Trade - . preview: how can a city’s location near the sea

Chapter 8 Section 2 Review Page 196 - . 1. what is the difference between relative and absolute age. relative age is the