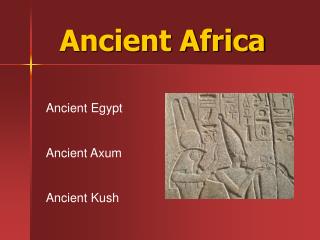 Intro to ancient Africa - . “the birthplace of the human race”. oldest human remains have been found in africa.

Ancient Africa - . 1. describe the physical geography of africa. how does it affect the way people there live?

Ancient African Civilizations - . warm-up: what made america such a powerful nation?. what’s the most famous african

11/19/12 West Africa - . objective: describe the impact of the spread of islam and list 4 locations where the religion

Kingdoms of Africa - . did you know?. africa is one of the earth’s seven continents. it is the second largest continent

Ancient Africa Part II - . the kingdom of axum reached from the mountains in east africa to the red sea and flourished

CHAPTER 13 Ghana : A West African Trading Empire - . i. government and military a. government led by an all-powerful

Ancient Africa - Nile River Culture and the Pyramids - . i. cultural and environmental determinants of egyptian

Standard: 16.Describe the decline of Egypt and rise of other African cultures: Kush, Ghana, Mali, Songhai, including