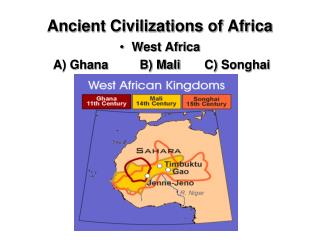 Ancient Civilizations of Africa. West Africa  A) Ghana B) Mali C) Songhai. A) Ghana: Their greatest achievement was in the area of trade. http://www.youtube.com/watch?v=3x-IwaVhnmo&feature=related