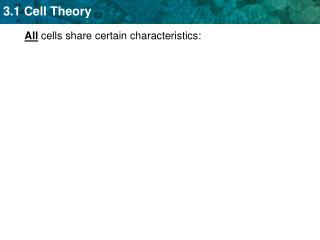 VIRUSES ARE NOT ALIVE BUT AFFECT LIVING THINGS - . viruses share some characteristics with living things. viruses

1 st Semester Review - . cell structure and function. cell theory. a. nature of cells 1. cell theory a. cell is the

Cells and Cellular Transport - . s7l2a explain that cells take in nutrients in order to grow and divide and to make

Characteristics Of Living Organisms - . science 13 . eo4 . tsw 1. 1. cellular organization. all organisms are made of

What I s A Plant - . chapter 3 lesson 1. what characteristics do all plants share???. key answer: 1. nearly all plants

CELLS - . characterisitcs. cells. there are many types of cells, but we are most familiar with eukaryotic cells, notably

Stem Cells - . characteristics they continue to grow and proliferate, given the correct signals (from a hormone or a

Life and Living Things - . cells. what are the structures of a cell? . compare and contrast plant and animal cells. name

Come to the Back and Check out a Text - The science of microbiology classification of organisms. chapter