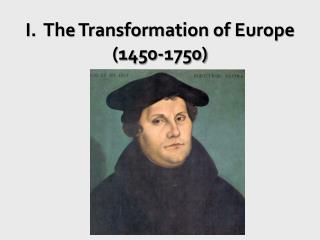 I. The Transformation of Europe (1450-1750). A. Changing Balance of Power. The Church: “ Reformations ” The Mind: Scientific Revolution & the Enlightenment The Economy: Mercantilism Politics: “Absolute” Monarchs The State: Rise of Nationalism. B. Corruption:.