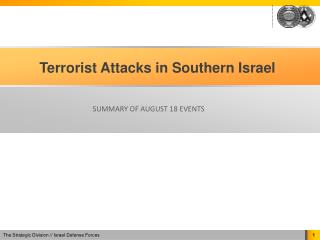 Terrorist Attacks in Southern Israel. SUMMARY OF AUGUST 18 EVENTS. Focal Points. On 18 August 2011, a series of terrorist attacks was perpetrated against civilians and IDF soldiers in Israel's southern region. Eight people were killed in the day’s attacks and at least thirty-one were injured. Terrorist - . what is terrorism? do both sides practice it? how/when/who?