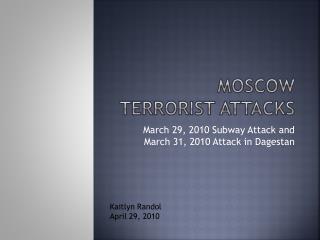 Ethnic Conflict - . chechnya and russia: a conflict of the ages. chechnya travel guide. by plane chechnya's airport is

Chechnya: an oil rich Islamic break away Republic in the Caucuses Region - . 1858 - after decades of violent resistance,

Terrorist Takeovers - . a growing threat. what we are dealing with???. mumbai. mumbai. history. there have been a couple

The Nuclear Terrorist Threat to Russia and the World -- What is to be Done? - . matthew bunn, harvard university 2nd

TERRORISM - . definition of terrorism it is a term used to describe using power and force against people or their

Terrorism 101 - . who did it? why did he/they do it? what did he/they get out of it?. definition of terrorism:. september

Terrorist - . what is terrorism? do both sides practice it? how/when/who?