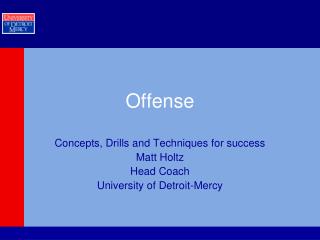 Offense - . defense. conclusion. kentucky had the best scoring offense in the sec, and mississippi state held teams to

Offense Positions - . center. main job is to snap ball to quarterback to start play. after ball is snapped, the center

SPREAD OFFENSE - . ryan head. what is the spread offense?. an offensive football scheme used by all levels of the sport.