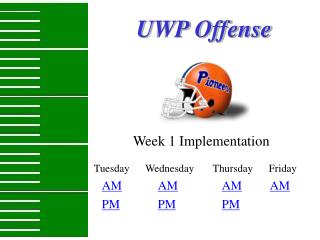 UWP Offense. Week 1 Implementation. Tuesday Wednesday Thursday Friday. AM. AM. AM. AM. PM. PM. PM. Offensive Goals. Goals To outscore our opponent. VICTORY! To score six times a game. To out-hit and punish every defense we face.

Split Back Offense - . by coachingyouthfootball.net. split series. 3 back may have to help block tight end. split left 21

OFFENSIVE PLAYBOOK - . playbook legend formations the te will line up according to the formation side (ex: blue rt).

Standard 2.9 Ultimate Frisbee (Offense) - . 2.9 identify opportunities to pass or dribble while being guarded. nothing