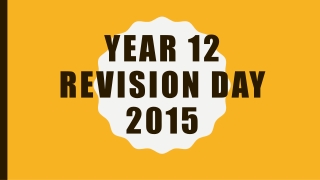 Year 12 Revision Day 2015. Area of Study. Discovery. Let's all discover. let's all discover. • What’s something you have realised about discovery from viewing this text? (1 minute) • Generate a thesis statement around these ideas and share. In a man's life. in a mAN'S LIFE.

The King Tut Story - . by:trey linton. how did king tut die ?, hold old was king tut when he became king? how many kids