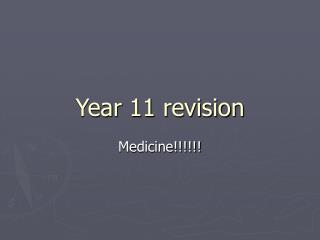 Year 11 revision. Medicine!!!!!!. The Egyptians: 3500BC-1550BC. Wealthy Nation Farming was very important Traded with many different countries The Nile was of great significance for farming (flooded) Led to the belief in Channels “May your Channels be sound!”. Attitudes and beliefs.

YEAR 11 REVISION - . how to revise for an a/ a* in the english exam. as father christmas for…. a simple way to gain an

Year 11 Revision Information Evening - . queen elizabeth’s girls’ school. everyone can succeed, but you must want

Year 11 Study Skills / Revision - . how to prepare properly for your exams!!. some encouragement. a number of teachers

Year 11 Mock GCSE Exam Revision - . equipment. specifications. what is a

GCSE French Revision WJEC FAMILY - . instructions: read the french word and try to guess what it means. click once to see