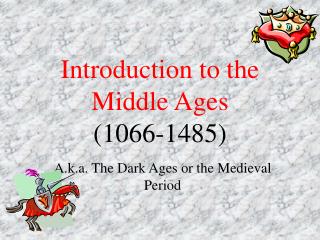 Introduction to the Middle Ages (1066-1485). A.k.a. The Dark Ages or the Medieval Period. William the Conqueror & the Norman Influence. Battle of Hastings was said to change the course of human history. It began the Norman Conquest

Seating and Mobility Solutions for Bariatric Consumers of all Ages - . presented by. jane fontein pdg vancouver, bc,