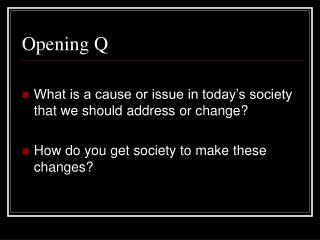 Opening Q. What is a cause or issue in today’s society that we should address or change? How do you get society to make these changes?. Opening Q.

Opening the Heart and Opening the Arteries - . cardiovascular disease – a holistic approach to reducing the risk. the

The Surveillance Service in the Barents Sea – closure and opening of areas on real time basis - . by bjarne schultz