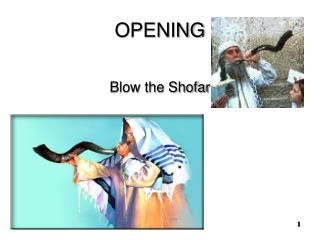 OPENING. Blow the Shofar. 1. 1. 1. OPENING. Why do we blow the Shofar? Exodus 19:16 “On the morning of the third day there was thunder and lightning, with a thick cloud over the mountain, and there was the sounding of a very loud SHOFAR blast. Everyone in the camp trembled.”

Opening - . “but when the old man left, he was suddenly aware of the old hogan : the red sand had been swept unevenly;

Opening - . issue: if health behavior is related to some stable attribute of the person, what is that? how is it

Opening - . test your memory!. put each picture in your mind, and it will remind you of each commandment. 1 st –

Opening - . one of the important morphological operations applied to either grayscale or binary images is opening. it

Opening - . course objective. the participants will 1. become aware of the importance of good listening skills. 2.

Opening - . answer the following ?’s: 1) define government in your notebook (in your words). 2) why do people need

OPENING - . “the thief does not come except to steal, and to kill, and to destroy . i have come that they may have

Opening - . what are “environmental issues ?” are there any that affect you and your family?. ss6g9 the student will

Opening - September 20. opening . get out your hw—arguments prepared for the debate begin the opening activity at the

OPENING - . review of feedback work. from teachfirst , 2010. answers to questions come from:. in the book. in my head. in

Opening - . what is race ? how many races are there? which ones?. race and ethnicity. the spatial implications of