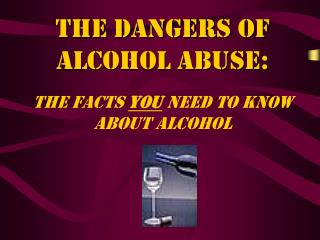 The Dangers of Alcohol Abuse: the facts You Need To know About alcohol Alcohol in the news Everyday, thousands of people hear about terrifying stories and countless deaths that are the results of alcohol abuse in the news and on the radio. Substance Abuse Curriculum - A person diagnosed with alcoholism is therefore addicted to alcohol. ... treating the

1. What is alcohol and why is it considered a drug? - . alcohol is a depressant . it is a drug because it changes a