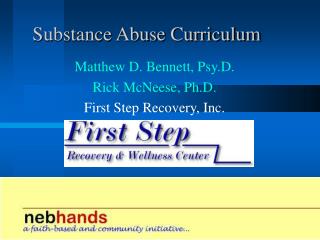 A person diagnosed with alcoholism is therefore addicted to alcohol. ... Treating the depression does not mean the alcoholism will also go away. ... Drug Abuse Treatment: The Blending of Research and Practice A Community Treatment Provider Perspective - . presented by:

Curriculum Mapping - . archdiocese of baltimore presenter – marie strangeway . we need to know where we will begin….