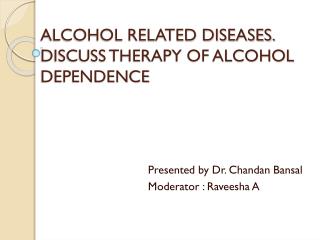 ALCOHOL VOCABULARY Chapter 21 - . what is a standard drink?. ethanol. the type of alcohol in alcholic beverages. powerful

Alcohol-related disorders - . unless otherwise indicated, all answers are taken from dsm-iv-tr, from apa practice

MULTIPLE CHOICE - . a. b. c. d. 1. although alcohol may at first cause a drinker to feel energized, it is actually a(n).