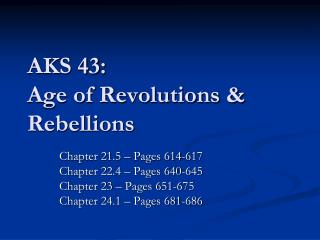 “ The War to End All Wars” - WWI European Tensions Ignited - . in your notes-answer (in your own opinion): when is it

Scientific Revolutions: Historical Perspective  - . after the scientific revolution: the enlightenment. what is the

Revolutions of the 1820s-1840s - . the hanover kings . the georges more german than english scandal, family squabbles.

American Revolution/ French Revolution - . unit 1: essential question #2 how did the principles and philosophies of the

How did Russia become the USSR only to become the CIS? USSR: UNION OF SOVIET SOCIALIST REPUBLICS - . cis: commonwealth of

LATIN AMERICAN REVOLUTIONS - . essential question : what were the main causes and effects of latin american revolutions?.

Age of Revolutions - . scientific revolution. what was it ? the period roughly between 1500 and 1700 during which the