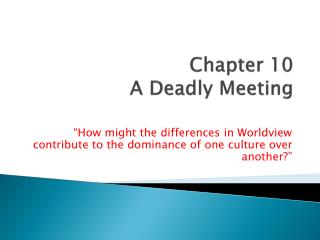 A Deadly Disease - . by: ibrahim haydar. this disease is the quality of being unaware, lazy, unknowing, and uncaring

10 deadly web design sins - Creating a professional web site is a stressful business. stress because it reflects your

A Deadly Perception - . the burning of witches in early modern europe. one place to observe the conflict and continuity

Chapter 10 - A - . identification of minerals with the petrographic microscope. content. sample preparation microscope

10 most deadly diseases In the world - . by marissa.aragona.

Deadly Bubbles - . by matthew conway. intro. the bermuda triangle is home to many mysteries of lost ships one of the