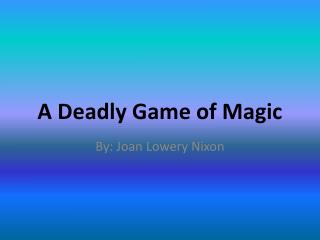 Magic Wand GAME - This is the presentation of the new mobile

A Deadly Disease - . by: ibrahim haydar. this disease is the quality of being unaware, lazy, unknowing, and uncaring

A Deadly Perception - . the burning of witches in early modern europe. one place to observe the conflict and continuity

A Darker Shade of Magic (Shades of Magic)

Magic Kingdom: A Place of Magic and Awe - One of the most popular parts of disney world is magic kingdom. kids love this

“Huanglongbing (HLB)” A Deadly Disease of Citrus - . a power point presentation of the california citrus research

Chapter 10 A Deadly Meeting - . “how might the differences in worldview contribute to the dominance of one culture over