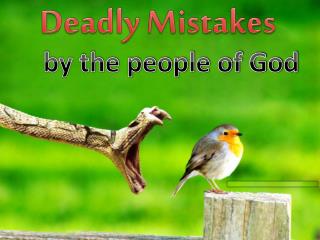 6 Deadly Leadership Mistakes - Even the most effective leaders have flaws and make mistakes. unfortunately, many leaders

Outbound Sales: Are You Making These 5 Deadly Mistakes - This document explains 5 deadly mistakes in your outbound sales.

Deadly Bubbles - . by matthew conway. intro. the bermuda triangle is home to many mysteries of lost ships one of the