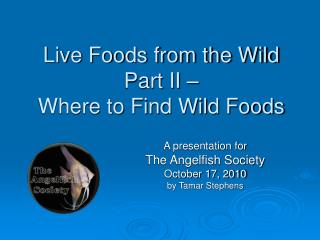 Live Foods from the Wild Part II – Where to Find Wild Foods. A presentation for The Angelfish Society October 17, 2010 by Tamar Stephens. About this presentation. This is the second in a series of presentations on live foods from the wild.

Foods Avoid While Traveling - When you travel, you want to eat all those delicious foods on the street and restaurant.

Texture Profile Analysis A closer look at this popular way of characterising the structure of foods - . tpa - the

Obesity in Kids ??? Healthy Living by Fitwits and Elvis Pretzl - Healthy eating and a basic understanding of the

How to help your worms live longer - . a c. elegans mutant that lives twice as long as wild type. kenyon c, chang j,