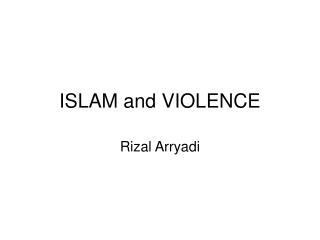 ISLAM and VIOLENCE Rizal Arryadi Background Recent terrorist bombings all over the world Islam is often blamed and accused as a religion of war, teaching violence and hatred. Some people has used verses in the Noble Quran to support their arguments that Islam is NOT a peace religion

Islam and Science - Islam in the light of

Christianity and Islam - . question for thought…. what are some things that most religions have in common? what are

Muhammad and Islam - . thesis: while many historians portray islam developing in a cultural void, the archaeological

Islam and Science - The spread of islam and the development of science. islam and science. the seen and the hidden

Islam and Christianity - . is allah the same as yahweh?. brief history. mohammad was born in 570 ad. at the age of 25, he

Islam and Women - . women in pre-islamic near east. life was rough… according to ‘law’ hammurabi’s law code (1752

Art and Islam - . art and islam. islam has 1500 years of art and culture. islam forbids the creation of images of

Africa and Islam - . rahi patel, daniel pham. key terms. islam – a religion based on the qur’an, a book believed to

Islam and Slavery - . by: larissa reed. islam. muhammad was born in quaraysh in 571 born into proverty gets into

Christianity and Islam - . rise of christianity. some jews began to revolt against roman rule, resulting in all jews

Islam and Afghanistan - How does islam connect with the past, present and future of afghanistan?. islam and afghanistan.