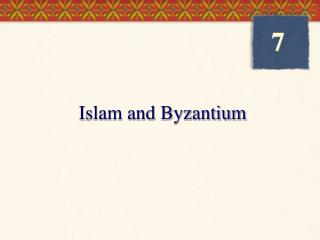 7 Islam and Byzantium ©2004 Wadsworth , a division of Thomson Learning, Inc. Thomson Learning ™ is a trademark used herein under license. The Middle East in the Time of Muhammad The Rise of Islam Arabs were a Semitic-speaking people

The Byzantine Empire and the Rise of Islam - . what great empire centered in constantinople flourished for 1000 years?.

The East- An Empire and a Religion - . events from approx. 476-1453 ad in the eastern roman empire (byzantine) arabic

Byzantium, Islam, and the Latin West: The Foundations of Medieval Europe, 550-750 - . the west chapter 7. byzantium: the

Byzantine Empire - . rise of islam. the geography of the desert affected arab culture. islam began in the arabian

Islamic, Byzantine, and Medieval Art - . a quick look at art movements between the classical world and the renaissance.

Byzantium - . byzantium is the name given to both the state and the culture of the eastern roman empire in the middle

Chapter 8: The Byzantine Empire - . fall of rome. the decline of rome. life after the 5 good emperors death of marcus

The Rise of Islam - . arabia in late antiquity . struggle between sasanian empire (persian, zoroastrian) and byzantium