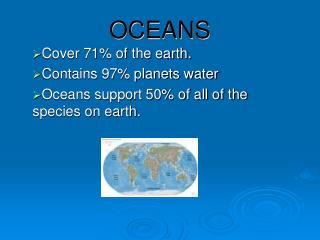 O ceans - . by:dewayne. f acts. the ocean is blue. the earth has five oceans. the water is saltwater. they are the

Earths Oceans - . 1. list the major divisions of the global ocean. 2. describe the history of earth’s oceans. 3.

IB Oceans and their Coastal Margins - . b1 – introduction to oceans: morphology of oceans &amp; ocean water. b1 –

Endless Oceans - . or what goes around comes around?. the value of the oceans. they generate half of earth’s oxygen

How oceans affect weather The moderating effect of oceans and climate By James A and Mike C - Science 11.3 oceans and

Oceans - . the water planet. intro to oceans unit . objective: students will be introduced to the ocean unit by

The Oceans - . introduction. the increase in world population and the continued rise of industrialization have resulted

OCEAN BIOME - . kellie byrne and sarah lamendola. here i am!. oceans can be found all around the world 75% of the planets

Tropical oceans biomes By: Don t tell them Kyle - Plants that you can find in the tropical oceans. giant kelpkelp. 6