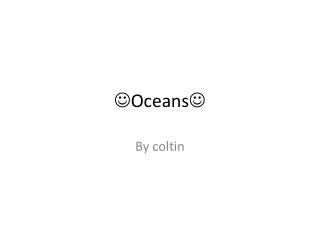  Oceans . By coltin. . Oceans are cool because there have lot of things like sharks , sting rays , eels , lots of types of fish that why I'm studding it.  turtles . Turtles like to eat some type of jelly fish when the turtle eats it close its eyes so there eyes don't get stung. Oceans - Where are the oceans?. identify the oceans. oceans. tides. waves. currents. the ocean floor. ocean storms. where

Oceans 11 - . historical i ntroduction. ocean uses. the two most important uses of the oceans to humans are as a source

Oceans - . spi 0507.8.1 describe the effects of the oceans on weather and climate. group assignment. each group will be

Physical Oceanography - . chapter 15. section 15.1 the oceans. oceanography is the study of the earth’s oceans the

IB Oceans and their Coastal Margins - . b3 – the value of oceans. resource base. world’s oceans represent a valuable

convection in the atmosphere and oceans - . aos 101 weather and climate lisha m. roubert university of wisconsin-madison

OCEANS - . by i jaz ah k uoi. l earning i ntention. we are learning to write about oceans. . what is an ocean?. an ocean

Aquatic Biome Part 1 – The Oceans - Ocean: a vast body of salty water, covering the majority (about 72%) of earth’s

Oceans - . by frank, danielle, and anthony m. ocean facts. oceans allow many citizens of the world to enjoy a nice,