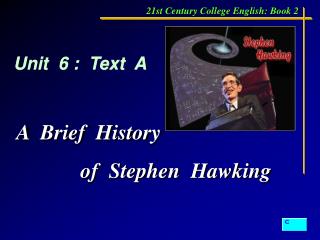 Unit 1 text A - . the icy defender. objectives:. grasp the main idea and structure of the text; learn and practice the

Unit 12 Text A - . what’s electronic commerce?. definition of ec. ec is the use of computer applications communicating

Unit 7 Text A - . what makes olympic champions?. mold mould a child into disciplined creature. strike a stone struck me

Unit 6 a - . reporting results. teaching objectives. upon completion of the unit you should be able to talk about company

Unit Two Text I A - . englishes. the title. do you speak english ? ---- the english language, the language used by

UNIT 6 Section A - . happy new year. i background information spring festival (chinese new year). far and away the most