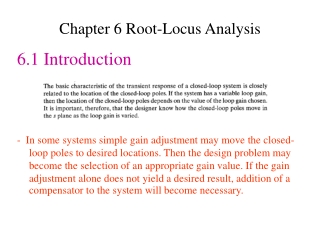 The Root Locus Analysis - . stability of control systems. its all about stability…. auto-pilot or fly-by-wire

Root locus - . a technique enabling you to see how close-loop poles would vary if a parameter in the system is varied can

Root Locus Method - . root locus. motivation to satisfy transient performance requirements, it may be necessary to