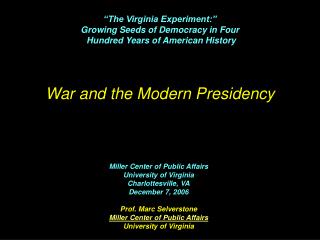 War and the Modern Presidency War and the Modern Presidency

UNIT 5: The President and the Executive Branch - . 1. the executive branch: executing the laws. what is the executive

President Eisenhower’s Modern Republicanism - . frustration with the stalemate in korea &amp; the red scare led to

PRESIDENTIAL POWER IN usfp - . some initial questions: what role do you think the president should play in usfp? the

TR and the Modern Presidency - . section 6.1. do now:. smart board activity:. how is this quote indicative of t.r. as a

12- 1 - . the presidency. presidential qualifications article ii, section 1 of the constitution states that the president

Congress v. The President - . dom,dom,dooooom. congress vs. president. since 1930, the executive branch has often seemed

Consider : How have presidential powers changed over time? - . homework : assignment 10 for tomorrow. consider : how have

James Madison’s Presidency: Transcending Jefferson - . *picking up after thomas jefferson since 1809* . created by:

Chapter 12- The Presidency: Leading the Nation - . the presidency. article ii powers of the chief executive appoints

The Presidency on Trial - . assessing the limits of presidential power. &quot;just so you know, we're ashamed the

Wanted: President of the United States - . c reate a job posting in the wanted/classified ads for the office of