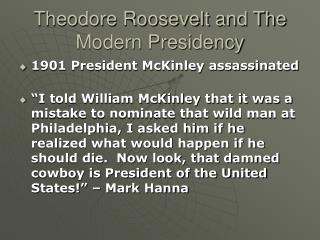 Theodore Roosevelt and The Modern Presidency Theodore Roosevelt and The Modern Presidency

The Presidency - . article ii of the constitution 4 year term of office with no limit until 1951 22 nd amendment – 10

Nixon’s Presidency - . at the beginning. richard nixon was elected in 1968 after losing the previous election to lbj.

The Meadow Mouse by Theodore Roethke - . in a shoe box stuffed in an old nylon stocking sleeps the baby mouse i found in