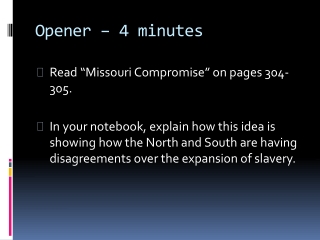 Opener – 4 minutes. Read “Missouri Compromise” on pages 304-305. In your notebook, explain how this idea is showing how the North and South are having disagreements over the expansion of slavery. Objectives:. Describe how the following increased tensions between the North and the South: