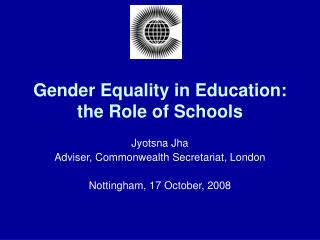 ICT in Basic Education - Where are we? a. scope of i ct use in basic education b. manner of introduction of ict in

Gender and Sexually Variant Students The Legal Responsibilities of Educators - . this is a guide and over view and legal

ICT for Gender Equality - An application of

How Schools Work and How to Work with Schools - . james f. bogden national association of state boards of education june

Disability Equality Scheme (DES) - . the following presentation has been adapted from the training for leicestershire

Education Revision 2013 - . role of education. focus: what is the purpose of schools? what do they do for society and

Gender and the Organization of American Higher Education - . privatization: an impulse of equal opportunities at