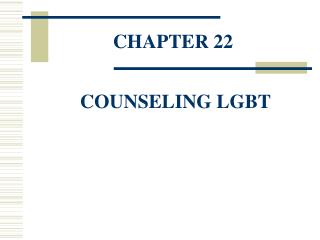 CHAPTER 22 COUNSELING LGBT. LGBT Facts. LGBT individuals have the affectional and/or sexual attraction to a person of the same sex (gay men and lesbians); bisexual individuals are attracted to both sexes and transgender individuals do not identify with their assigned sex at birth.