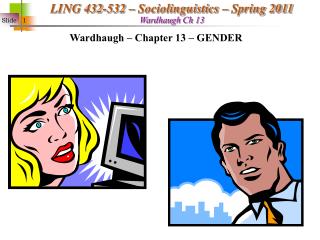 Issues of Gender Equality and locating men in National Policy for Empowerment of Women, 2001 - . consultation meeting on

Dialects and Sociolinguistics - . dialect : a subset of language that varies (typically) by region, but also possibly by

Gender Differences of the Pelvis: Why would this be? - . more upright, narrow inlet of true pelvis, thicker bones, larger

Sociolinguistics - . i . inter-relationships between linguistic form and social function ii. why should linguistics