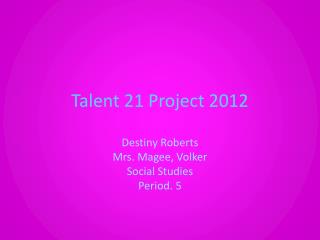 Talent 21 Project 2012. Destiny Roberts Mrs. Magee, Volker Social Studies Period. 5 . Introduction . this is my project for talent 21 and I had to right about 10 different subjects, so there is more information on the next slides . Early Humans . Project Management - . draft: 24 october 2012. expectations. this course is designed to introduce how program and project

Wednesday, June 20, 2012 - . personal touch to the esteemed guests with warm welcome &amp; one to one interaction

Talent Management Strategy - By incorporating a talent management strategy that aligns with your corporate vision, goals

Leveraging on Online Talent Sourcing Technology to Hire the Right Talent - . june 20, 2014. introduction. who are we?.