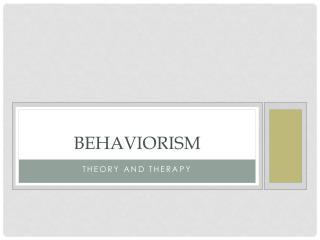 BEHAVIORISM. Theory and Therapy. Personality—what is, and how is it measured?. Personality - an individual’s characteristic style of behaving, thinking, and feeling How do they understand personality? 4 main approaches Trait-biological Psychodynamic Humanistic Social-cognitive. Behaviorism - . origin of behaviorism structure of stimulus - response (and consequence) types of consequences

Adult Learning Theories Behaviorism vs. Cognitivism - . by adan cortez iii. behaviorism. can be traced back to