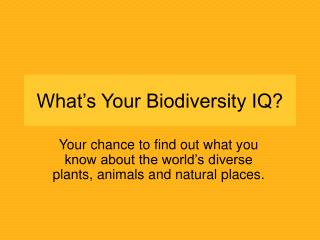 What’s Your Biodiversity IQ?. Your chance to find out what you know about the world’s diverse plants, animals and natural places. Cheetah Wart hog Three-toed sloth Domestic cat Wild turkey. 1. Which of the following could the fastest human outrun in a 100 yard race?. Answer:. Wart Hog. Biodiversity - . warm up question: answer in your notebook  what is your favorite animal? why? . biodiversity : short

Biodiversity - . origins of life. 1 billion years of chemical change to form the first cells, followed by about 3.7

Lesson #1 - . chapter 11 biodiversity and conservation biology essentials. characterize the scope of biodiversity on

Threats to Biodiversity chap 3 - . “ extinction is the most irreversible and tragic of all environmental calamities.