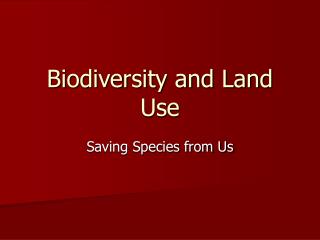 Biodiversity and Land Use Biodiversity and Land Use. Saving Species from Us. I. Dilemmas of Land Use Policy. Types of land use in the United States Urban Small proportion of land (about 3%) but growing rapidly due to urban/suburban sprawl Most of US population housed in urban areas (about five-sixths)

Biodiversity and Land Use

Land and Water Use - . part 3. rangelands. what is rangeland?. uncultivated land dominated by native plants: grasses,

Land Use - . ch 14 &amp; 15. land use categories. urban agricultural forests parks and protected. urban. for the

Bioenergy Biodiversity and Land use - . expert meeting on biodiversity standards and strategies for sustainable

Land Loss and Sacred Land Use - . land losses. indian tribes have historically suffered a devastating loss of their

Land Use - . control of unreasonable land use * deprive use or value of adjacent land hi * physical vs. “intangible”

Land Use - . are y’all city folk or country folk?. there are two types of land that we live in. urban: mainly covered

Land use and transport - . where are we ?. remember , there are four exam categories demand modelling with logit

Land Classification and Use - . chapter 8. land is more than soil. natural and artificial characteristics of an area to

Land Use and Zoning - . candidate briefing and update. land use and zoning. 45 minutes. not a lot of time for most, for