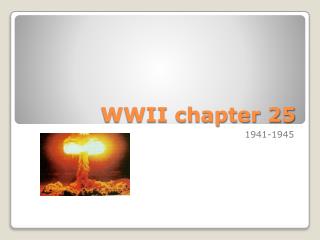 WWII chapter 25. 1941-1945. Describe the response of Americans to the rise of nationalism in Japan, Italy, and Germany during the 1930’s. How did President Roosevelt ready the US for war?

Air Power in World War II - . overview. the role air power played in world war ii and its significance how air power was

The Road to WWII - . chinese turmoil. in 1925, chinese president sun yixian died and leadership of china passed to

The Road to World War II - . on your own copy of this picture, add labels to explain what the cartoonist suggests hitler